Many years ago at Gamogun, in the province of Omi, was a castle called Adzuchi-no-shiro. It was a magnificent old place, surrounded by walls and a moat filled with lotus lilies. The feudal lord was a very brave and wealthy man, Yuki Naizen-no-jo. His wife had been dead for some years. He had no son; but he had a beautiful daughter aged eighteen, who (for some reason which is not quite clear to me) was given the title of Princess. For a considerable period there had been peace and quiet in the land; the feudal lords were on the best of terms, and every one was happy. Amid these circumstances Lord Naizen-no-jo perceived that there was a good opportunity to find a husband for his daughter Princess Aya; and after a time the second son of the Lord of Ako, of Harima Province, was selected, to the satisfaction of both fathers, the affair having little to do with the principals. Lord Ako's second son had viewed his bride with approval, and she him. One may say that young people are bound to approve each other when it is the parents' wish that they be united. Many suicides result from this.

Princess Aya made her mind up to try and love her prospective husband. She saw nothing of him; but she thought of him, and talked of him.

One evening when Princess Aya was walking in the magnificent gardens by the moonlight, accompanied by her maids-in-waiting, she wandered down through her favourite peony bed to the pond where she loved to gaze at her reflection on the nights of the full moon, to listen to frogs, and to watch the fireflies.

When nearing the pond her foot slipped, and she would have fallen into the water had it not been that a young man appeared as if by magic and caught her. He disappeared as soon as he had put her on her feet again. 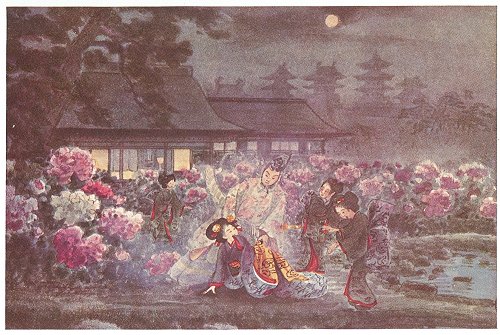 Princess Aya saved from her fall

The maids-of-honour saw her slip; they saw a glimmer of light, and that was all; but Princess Aya had seen more. She had seen the handsomest young man she could imagine. 'Twenty-one years old,' she said to O Sadayo San, her favourite maid, 'he must have been—a samurai of the highest order. His dress was covered with my favourite peonies, and his swords were richly mounted. Oh that I could have seen him a minute longer, to thank him for saving me from the water! Who can he be? And how could he have got into our gardens, through all the guards?'

So spoke the Princess to her maids, directing them at the same time that they were to say a word to no one, for fear that her father should hear, find the young man, and behead him for trespass.

After this evening Princess Aya fell sick. She could not eat or sleep, and turned pale. The day for her marriage with the young Lord of Ako came and went without the event; she was far too sick for that. The best of the doctors had been sent from Kyoto, which was then the capital; but none of them had been able to do anything, and the maid grew thinner and thinner. As a last resource, the Lord Naizen-no-jo, her father, sent for her most confidential maid and friend, O Sadayo, and demanded if she could give any reason for his daughter's mysterious sickness. Had she a secret lover? Had she a particular dislike for her betrothed?

'Sir,' said O Sadayo, 'I do not like to tell secrets; but here it seems my duty to your lordship's daughter as well as to your lordship. Some three weeks ago, when the moon was at its full, we were walking in the peony beds down near the pond where the Princess loves to be. She stumbled and nearly fell into the water, when a strange thing happened. In an instant a most beautiful young samurai appeared and held her up, thus preventing her from falling into the pond. We could all see the glimmer of him; but your daughter and I saw him most distinctly. Before your daughter could thank him he had disappeared. None of us could understand how it was possible for a man to get into the gardens of the Princess, for the gates of the castle are guarded on all sides, and the Princess's garden is so much better guarded than the rest that it seems truly incredible that a man could get in. We maids were asked to say nothing for fear of your lordship's anger. Since that evening it is that our beloved Princess Aya has been sick, sir. It is sickness of the heart. She is deeply in love with the young samurai she saw for so brief a space. Indeed, my lord, there never was such a handsome man in the world before, and if we cannot find him the young Princess, I fear, will die.'

'How is it possible for a man to get into the grounds?' said Lord Yuki Naizen-no-jo. 'People say foxes and badgers assume the figures of men sometimes; but even so it is impossible for such supernatural beings to enter my castle grounds, guarded as it is at every opening.'

That evening the poor Princess was more wearily unhappy than ever before. Thinking to enliven her a little, the maids sent for a celebrated player on the biwa, called Yashaskita Kengyo. The weather being hot, they were sitting on the gallery (engawa); and while the musician was playing 'Dannoura' there appeared suddenly from behind the peonies the same handsome young samurai. He was visible to all this time—even to the peonies embroidered on his dress.

'There he is! there he is!' they cried; at which he instantly disappeared again. The Princess was highly excited, and seemed more lively than she had been for days; the old Daimio grew more puzzled than ever when he heard of it.

Next night, while two of the maids were playing for their mistress—O Yae San the flute, and O Yakumo the koto—the figure of the young man appeared again. A thorough search having been made during the day in the immense peony beds with absolutely no result, not even the sign of a footmark, the thing was increasingly strange.

A consultation was held, and it was decided by the lord of the castle to invite a veteran officer of great strength and renown, Maki Hiogo, to capture the youth should he appear that evening. Maki Hiogo readily consented, and at the appointed time, dressed in black and consequently invisible, concealed himself among the peonies.

Music seemed to have a fascination for the young samurai. It was while music was being played that he had made his appearances. Consequently, O Yae and O Yakumo resumed their concert, while all gazed eagerly towards the peony beds. As the ladies played a piece called 'Sofuren,' there, sure enough, arose the figure of a young samurai, dressed magnificently in clothes which were covered with embroidered peonies. Every one gazed at him, and wondered why Maki Hiogo did not jump up and catch him. The fact was that Maki Hiogo was so much astonished by the noble bearing of the youth that at first he did not like to touch him. Recovering himself, and thinking of his duty to his lord, he stealthily approached the young man, and, seizing him round the waist, held him tight. After a few seconds Maki Hiogo felt a kind of wet steam falling on his face; by degrees it made him faint; and he fell to the ground, still grasping the young samurai, for he had made up his mind that he would secure him.

Every one had seen the scuffle, and some of the guards came hurrying to the place. Just as they reached the spot Maki Hiogo came to his senses, and shouted

'Come, gentlemen! I have caught him. Come and see!' But on looking at what he held in his arms he discovered it to be only a large peony!

By this time the Lord Naizen-no-jo had arrived at the spot where Maki Hiogo lay, and so had the Princess Aya and her maids. All were astounded and mystified except the Daimio himself, who said:

'Ah! it is as I said. No fox or badger spirit could pass our guards and get into this garden. It is the spirit of the peony flower that took the form of a prince.' Turning to his daughter and her maids, he said: 'You must take this as a compliment, and pay great respect to the peony, and show the one caught by Maki Hiogo kindness as well by taking care of it.'

The Princess Aya carried the flower back to her room, where she put it in a vase of water and placed it near her pillow. She felt as if she had her sweetheart with her. Day by day she got better. She tended the peony herself, and, strange to say, the flower seemed to get stronger and stronger, instead of fading. At last the Princess recovered. She became radiantly beautiful, while the peony continued to remain in perfect bloom, showing no sign of dying.

The Princess Aya being now perfectly well, her father could no longer put off the wedding. Consequently, some days later, the Lord of Ako and his family arrived at the Castle, and his second son was married to the Princess.

As soon as the wedding was over the peony was found still in its vase—but dead and withered. The villagers always after this, instead of speaking of the Princess Aya, or Aya Hime, called her Botan Hime or Peony Princess.